My fast "all strawberry" run 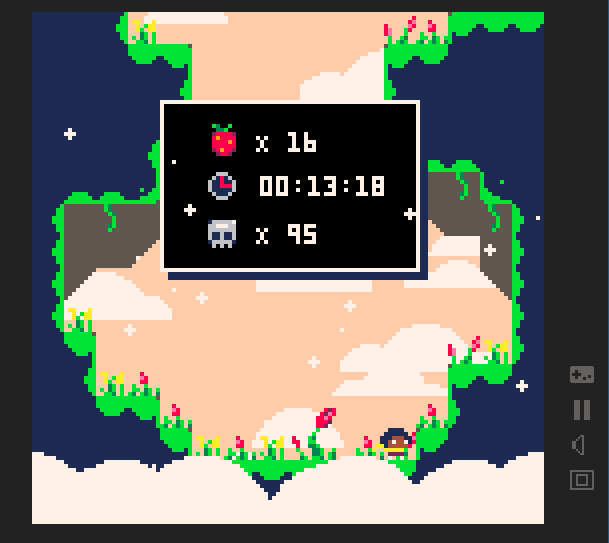 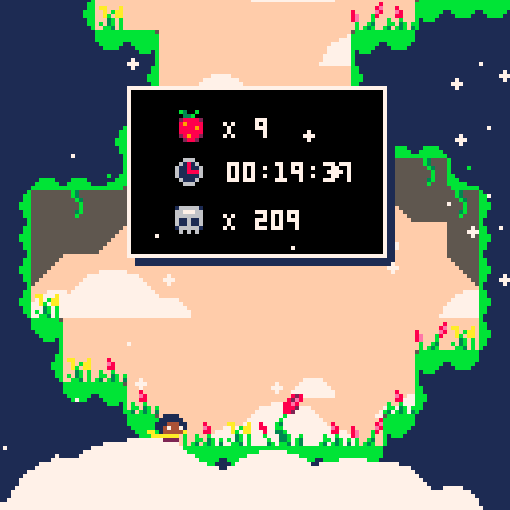 It could just be me, but playing Celeste classic used the d-pad on my switch pro controller, but this one is forcing me to use the analogue stick. It could just be my old school background,  but for me that makes the controls very difficult in this one comparitively.

I played this online, but I do have a Switch and I can understand why using the analog stick would make things harder, especially for the first one where you have to do diagonal dashes. Keep in mind this was made in 3 days so they couldn't do that much with it. I'd recommend playing on a keyboard if I were you.

this one would be easier with dpad, as it requires quick (but not precise) movement, which is easier on dpad (only if it isnt precise tho) and the mechanics in this game make d-pad use easier 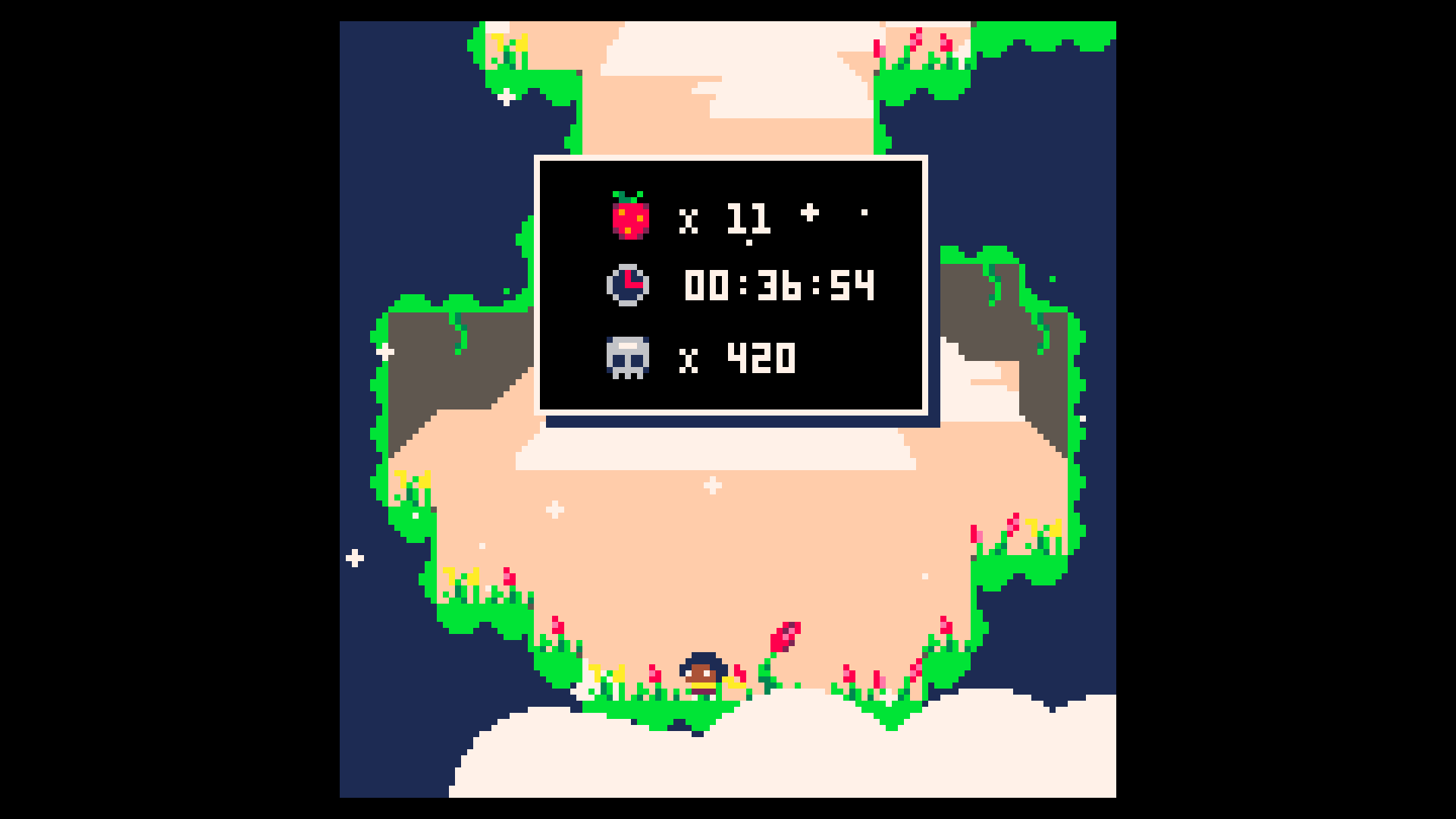 Not bad for a first playthrough, huh? I'll have to go back and 100% it though. LOVE the grapple mechanic! 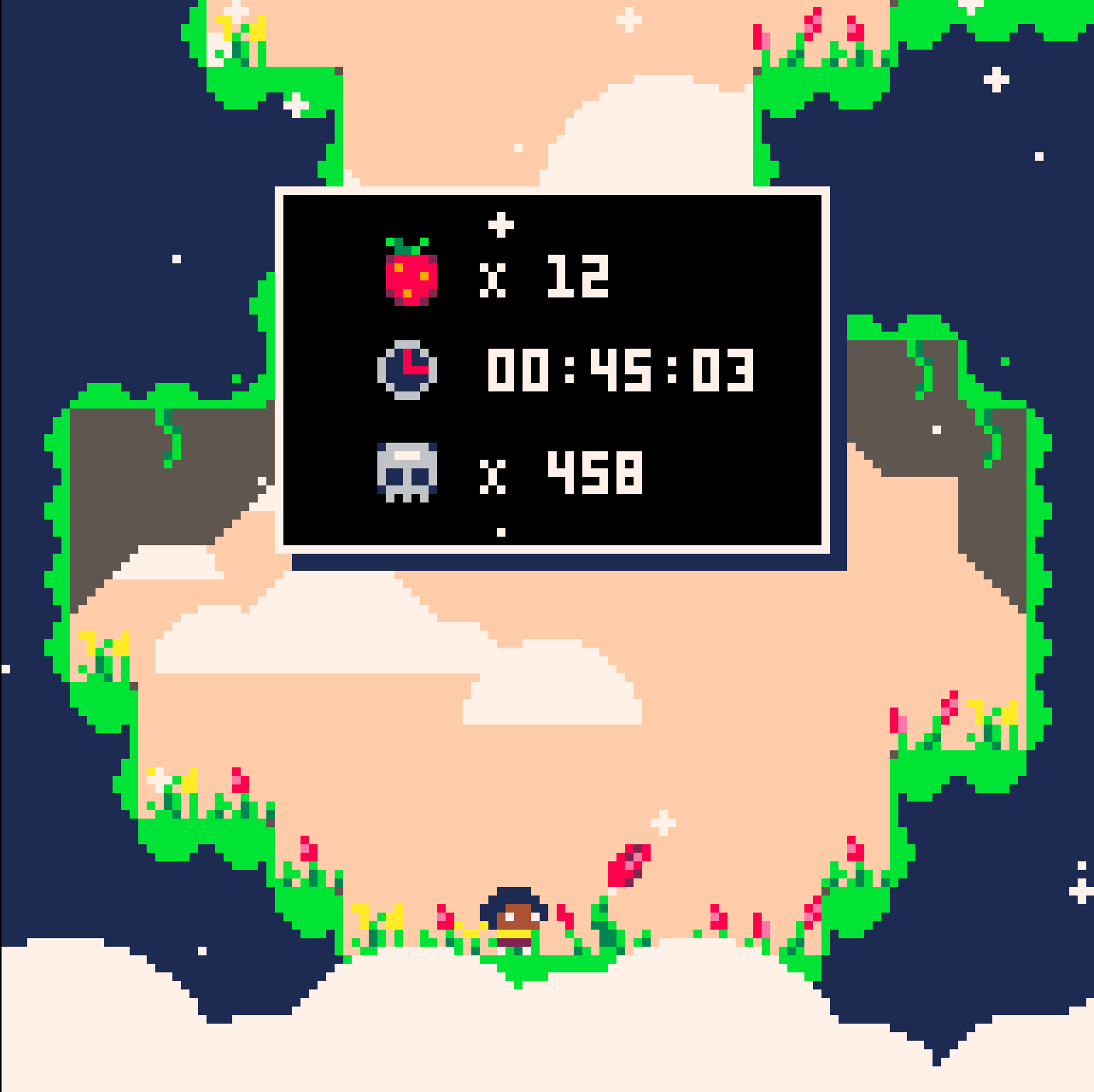 My hands are a bit sore, but it was totally worth it 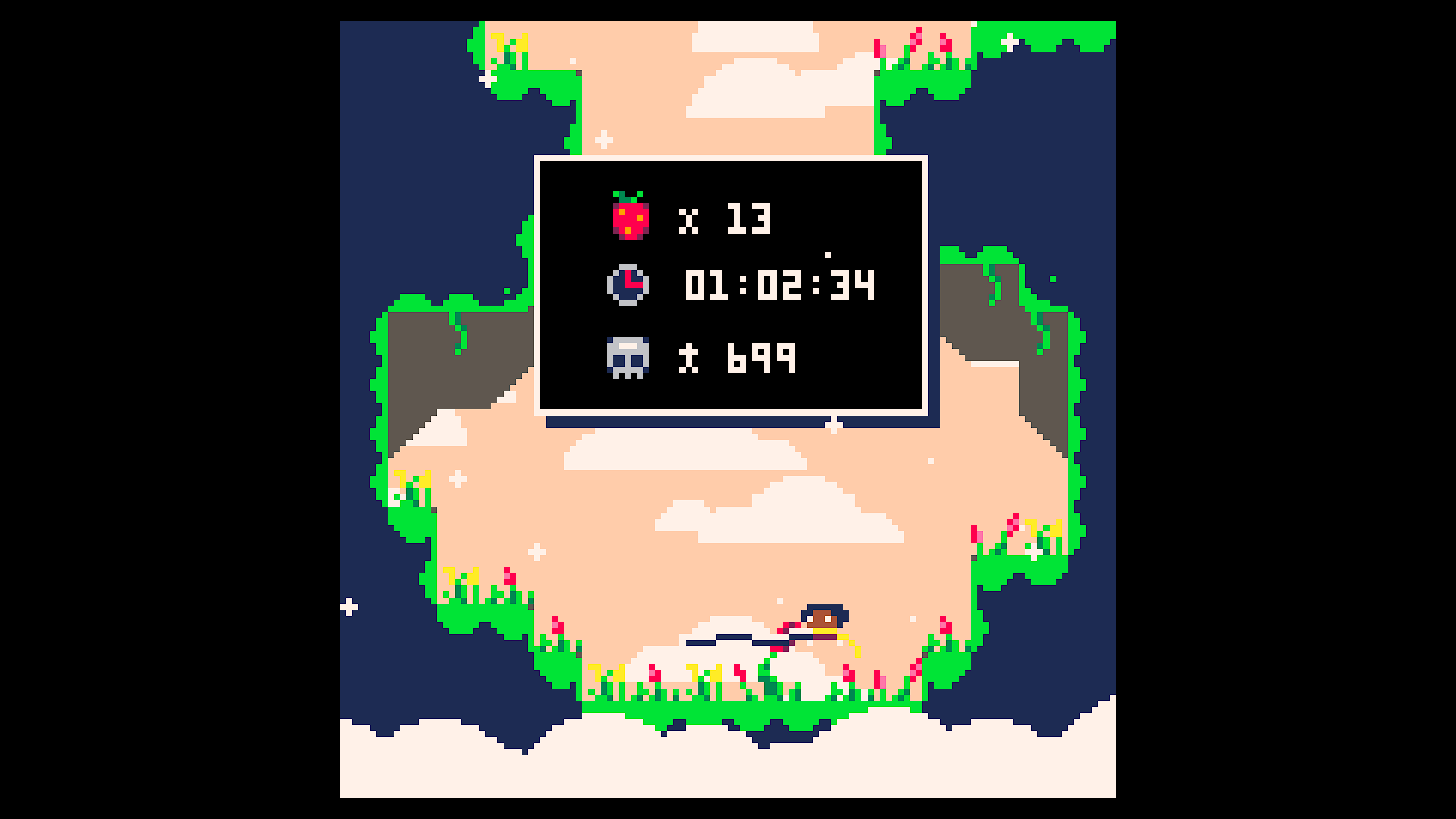 They just made it using Pico-8, most likely. (I don't see why it wouldn't be on itch.io; Celeste Classic and Celeste are both here.) 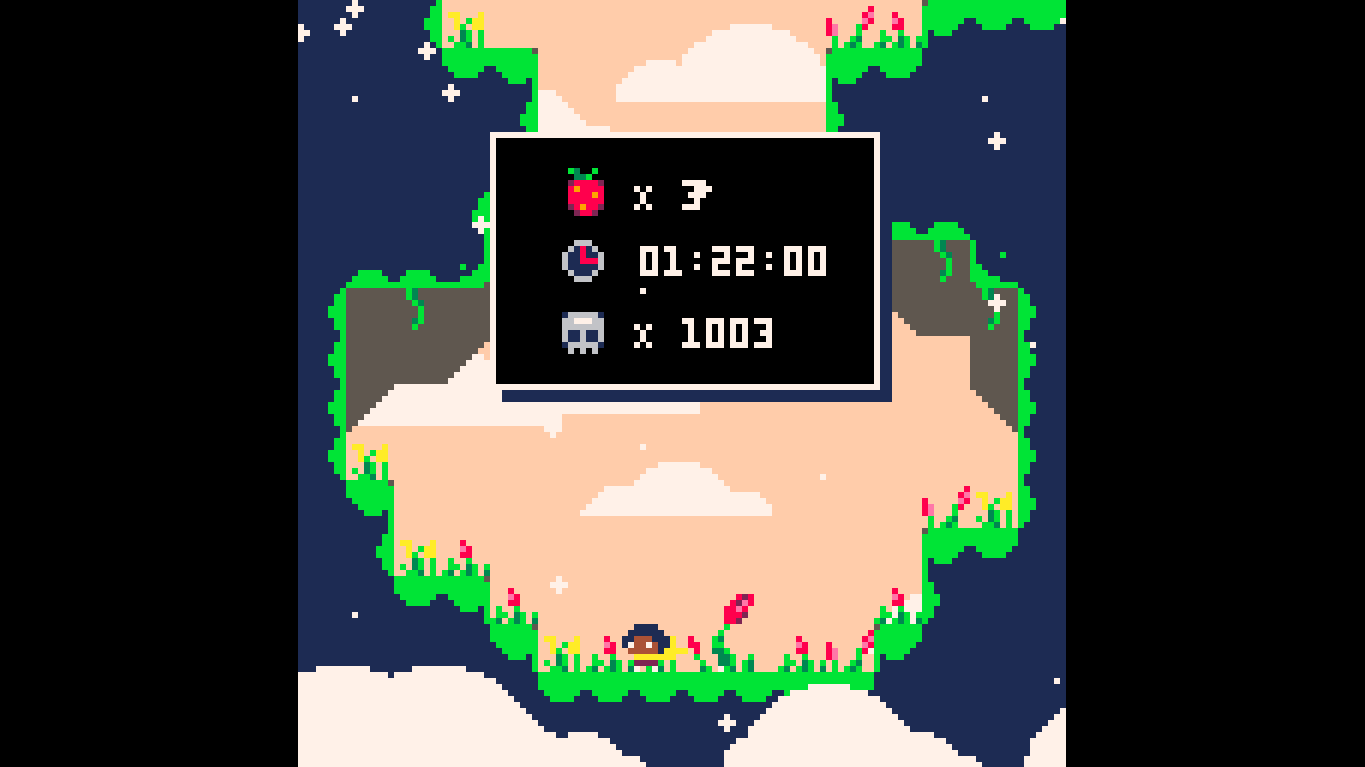 wait a minute... DOES THIS MEAN YOU'RE MAKING CELESTE 2

No, there is no Celeste 2. Sorry to let you down.

My reflexes are not very good in this game, so I'm having a lot of trouble in chapter 2.

this could really use a better indication of when you can use your grappling hook in the air, the cooldown is hard to figure out the timing on. I love the game but it can be so frustrating because of this.

thats because is more worked

sorry by my bad english, i am chilean

your english is pretty okay in my opinion :D 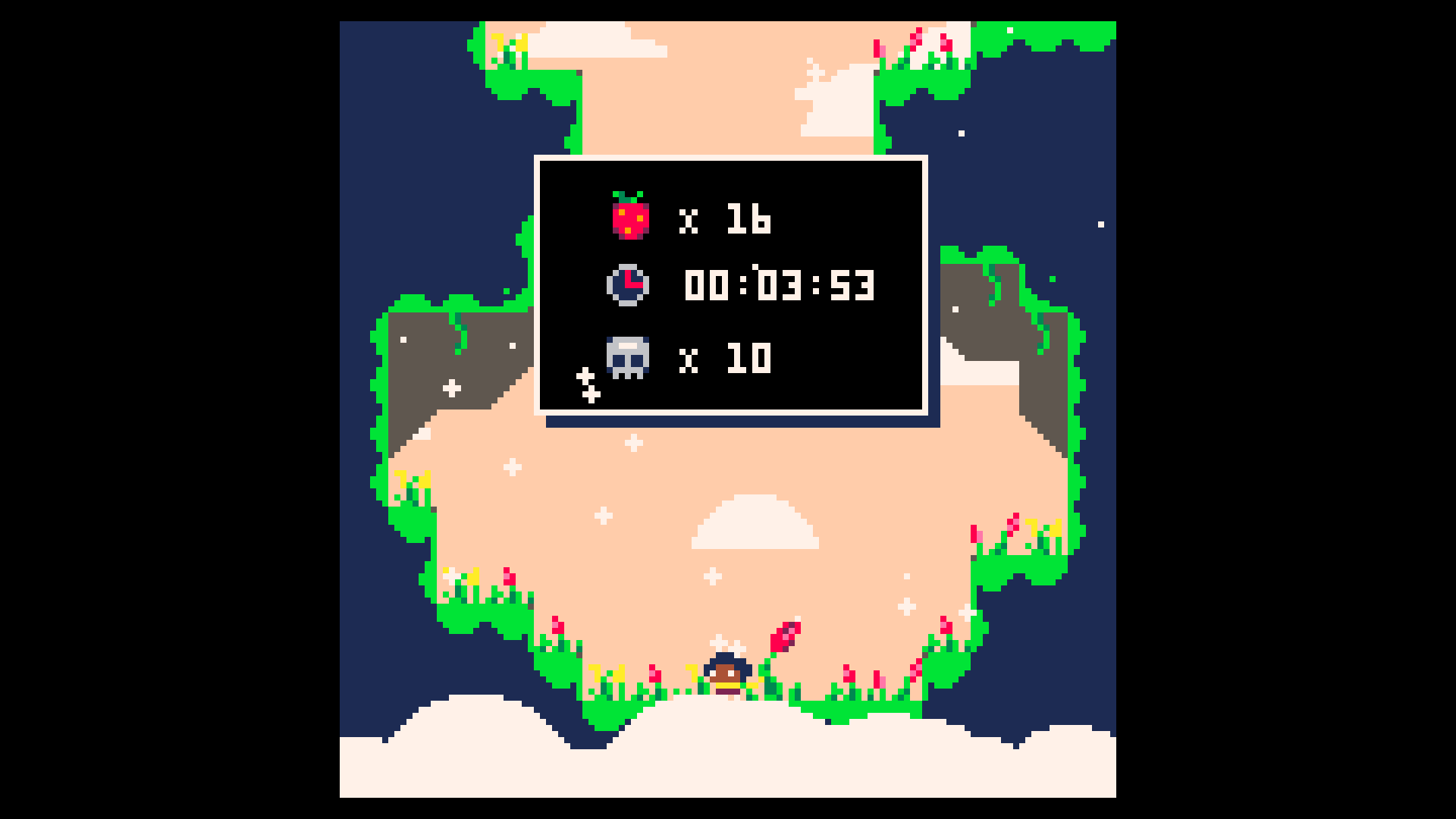 Loved it, thank you Matt! 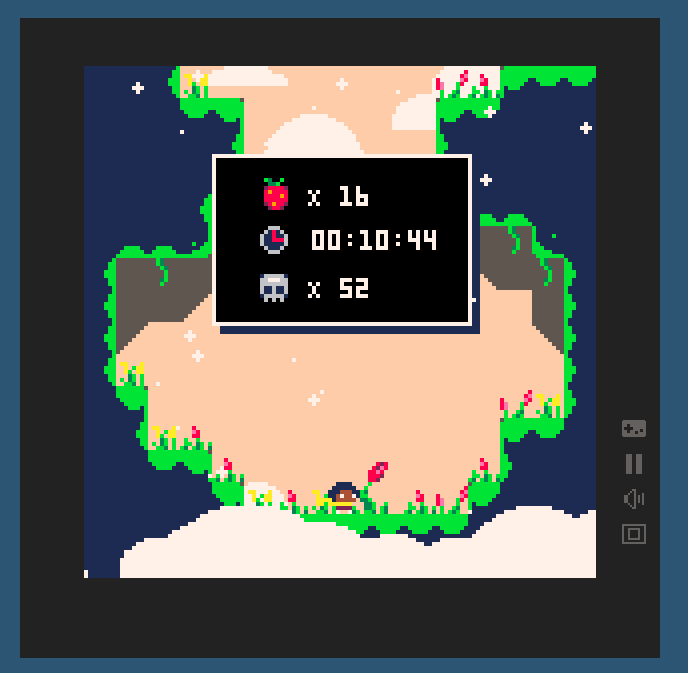 Took a bit longer than normally since I'm having trouble focusing in general right now, and trying to get all the berries, but I still finished it! I prefer the original Celeste I think and the gameplay of both Celeste games more, but this was still really cool and I enjoyed it a lot! :) 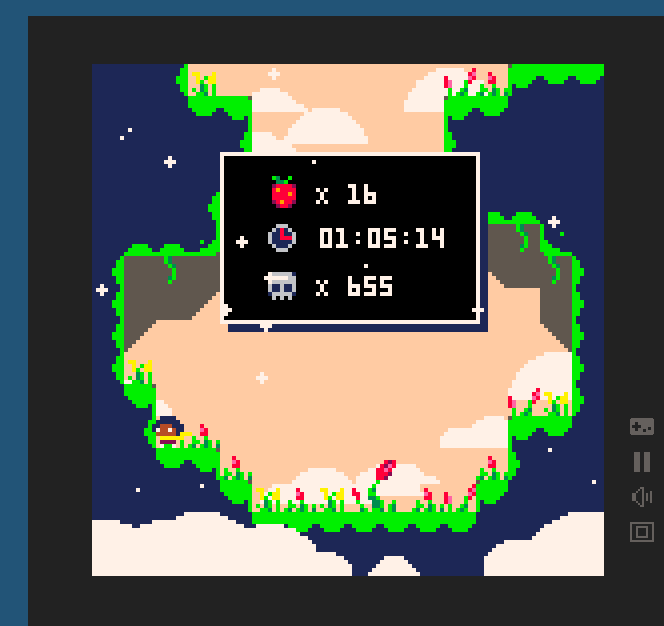 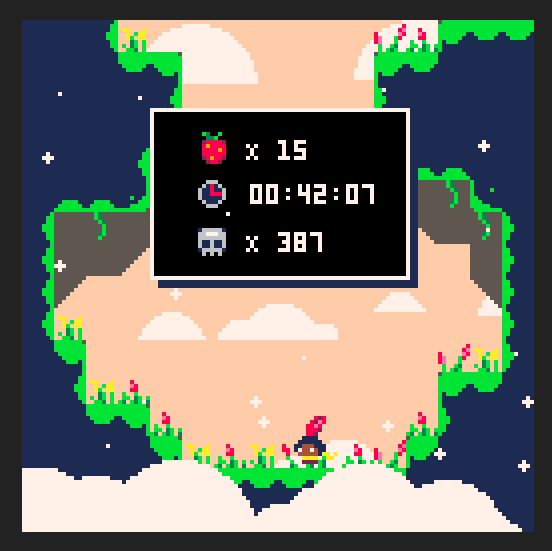 Only found this today! Not perfect but pretty happy with this time, really fun little game. Wouldn't say no to more of it! 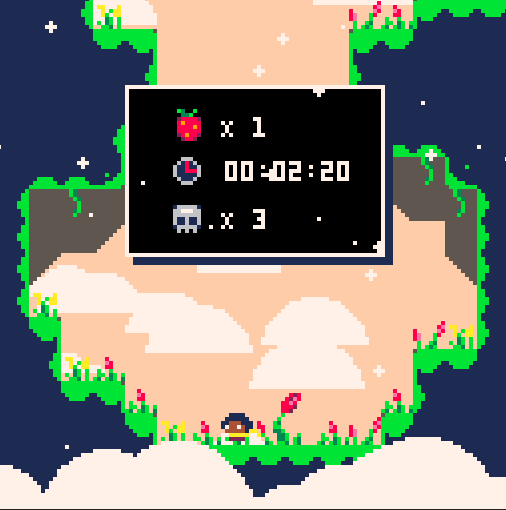 I absolutely love this game. It has amazing art, fun gameplay and pays homage to the original celeste while adding a mechanic of it's own. Good job, keep it up! 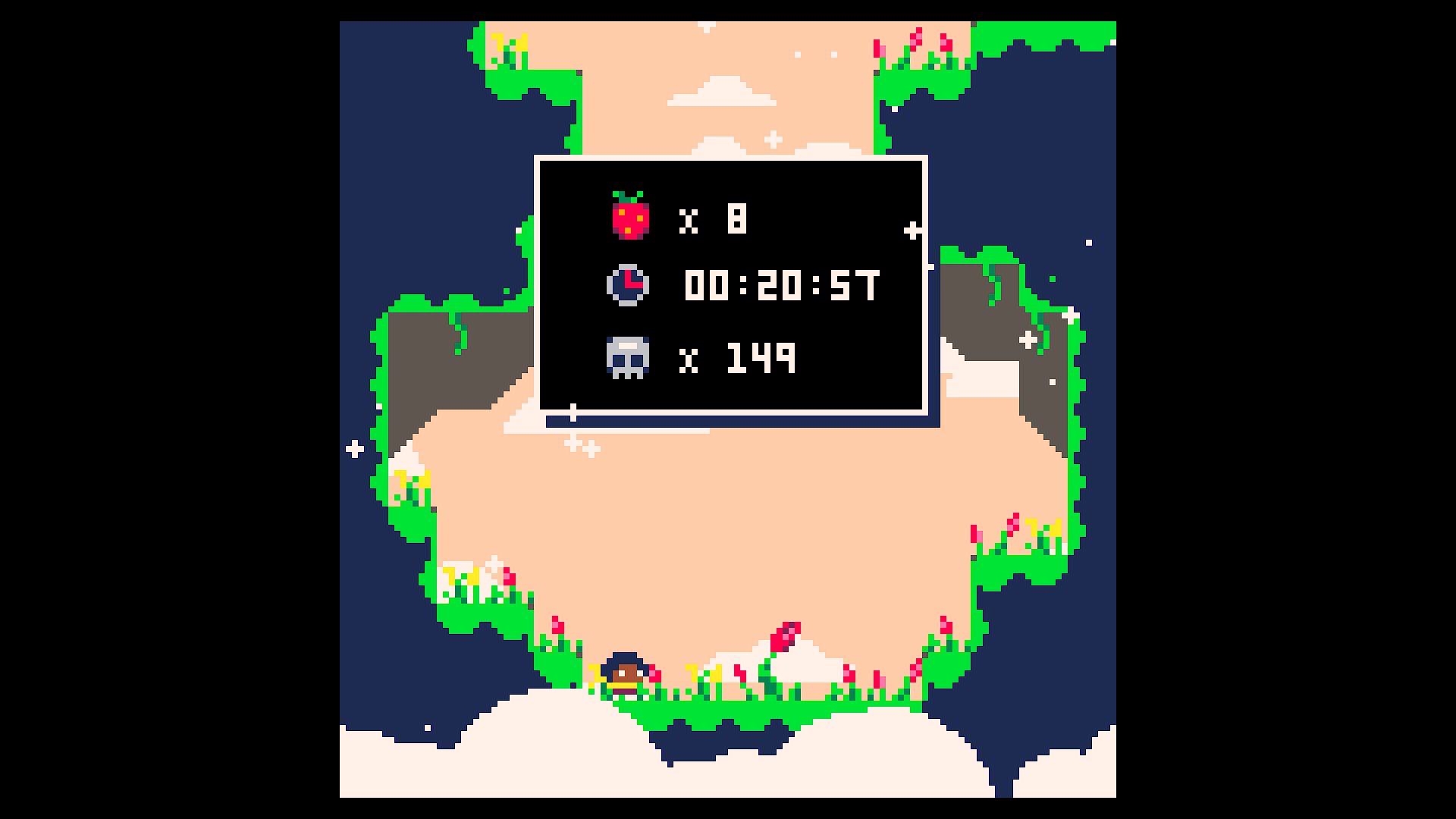 Yeah, I didn't knew how long the game was so I didn't want to spent a lot of time in the berries xD

I don't understand how people do this in such a short amount of time! I don't even know what to do in one room because of this stupid wall that is just messing me up!

another master piece. thank you 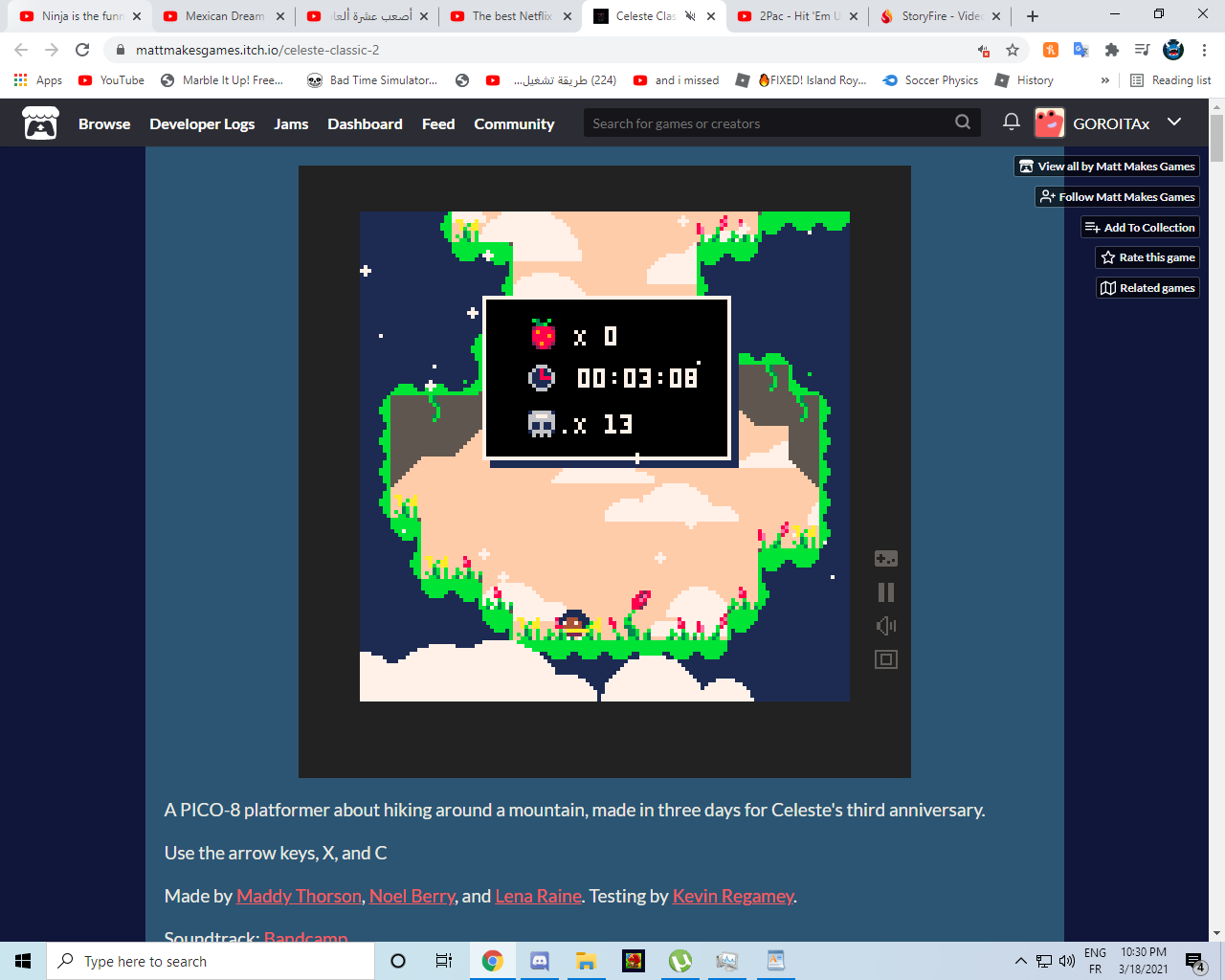 do you mean PB lol

No most likely BP for Big Pog 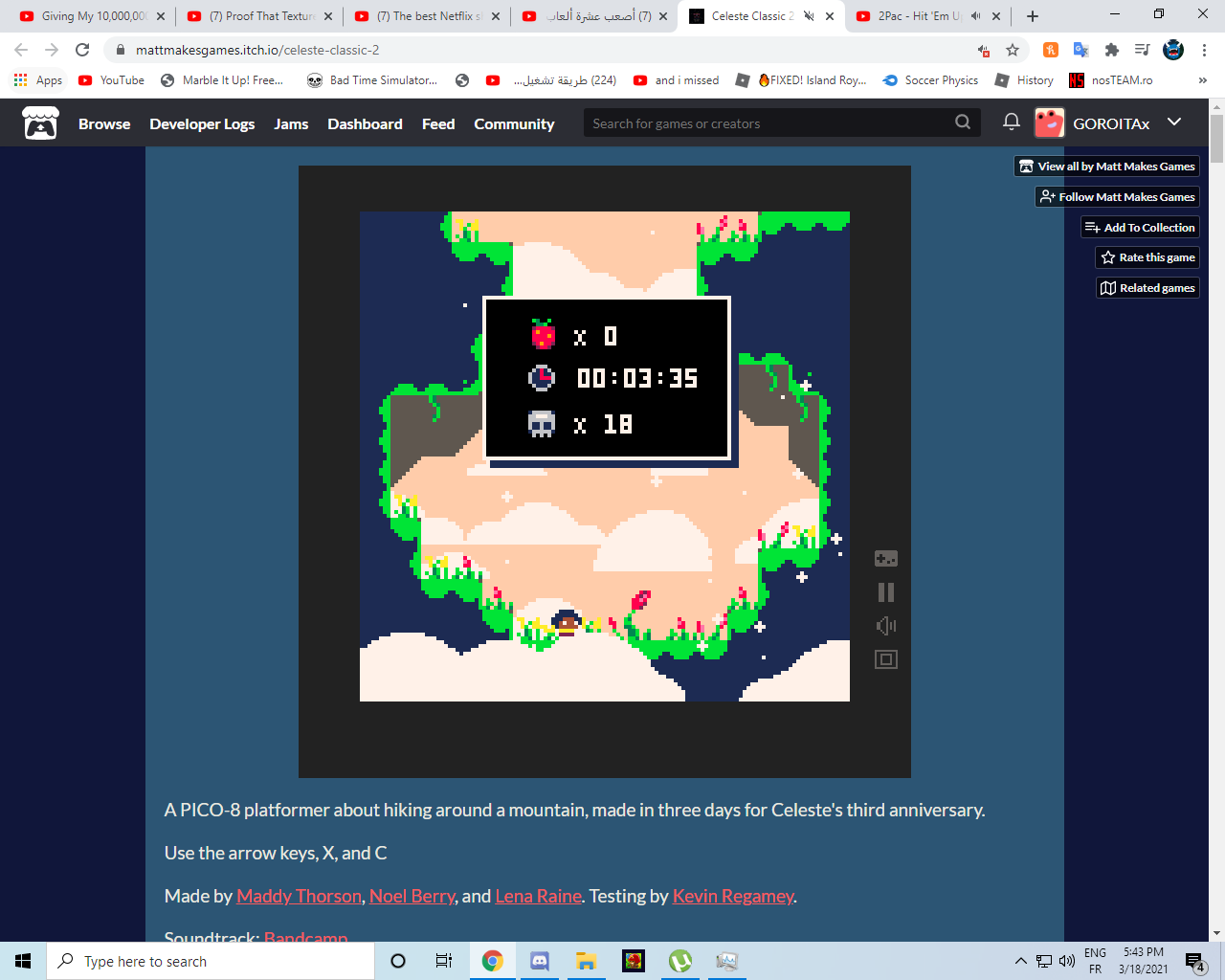 It's getting very difficult to do new BPs but here's my new BP part 4: 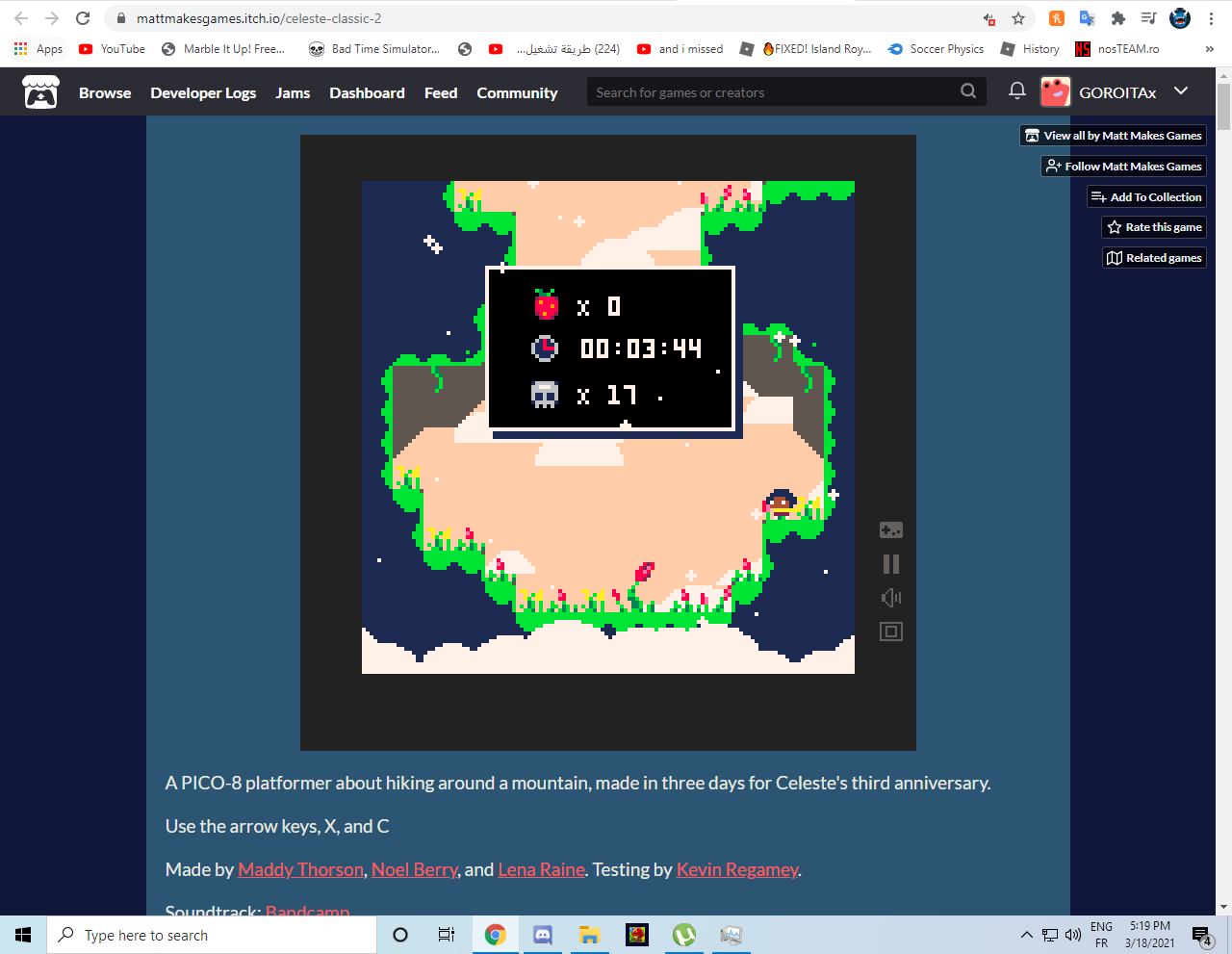 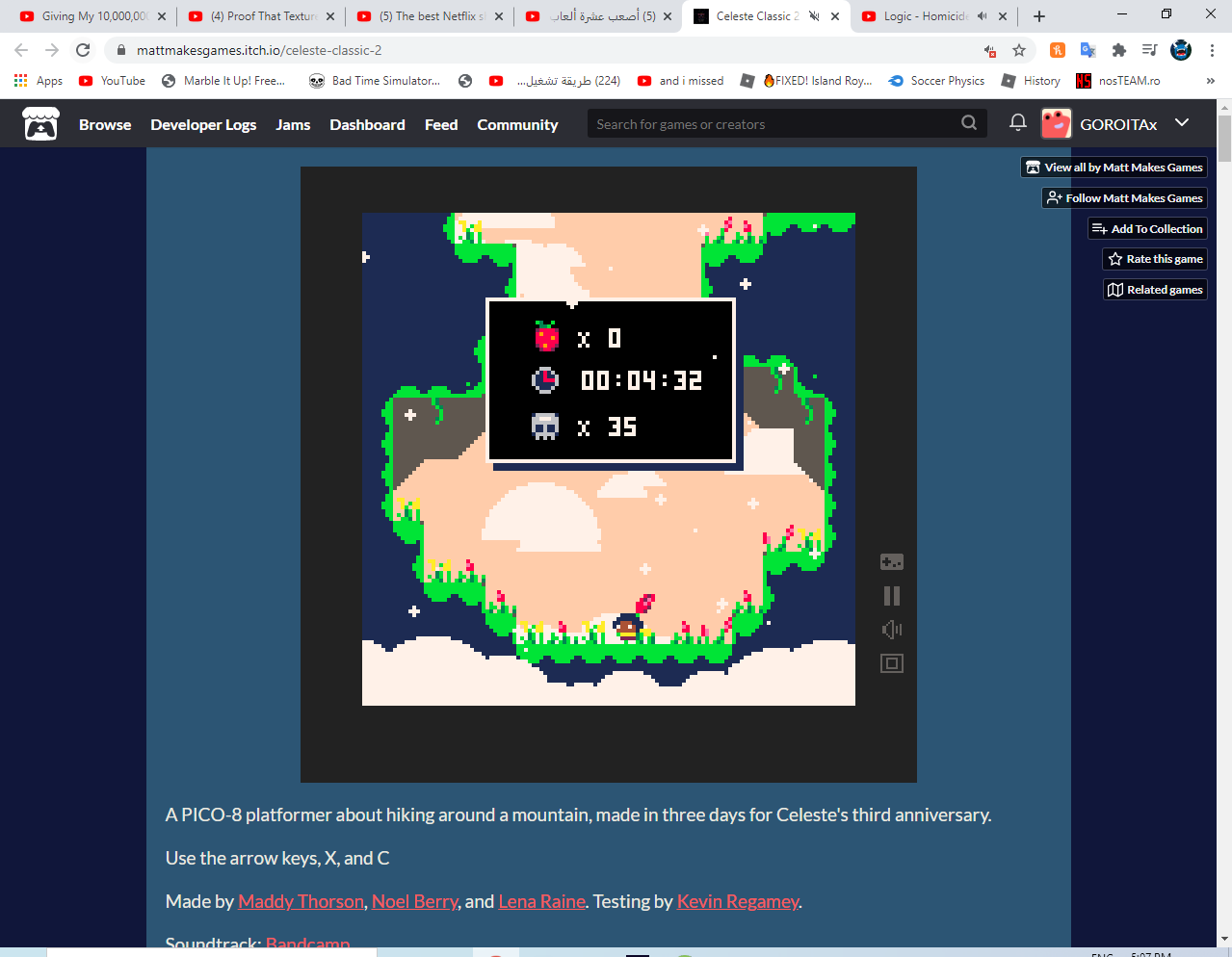 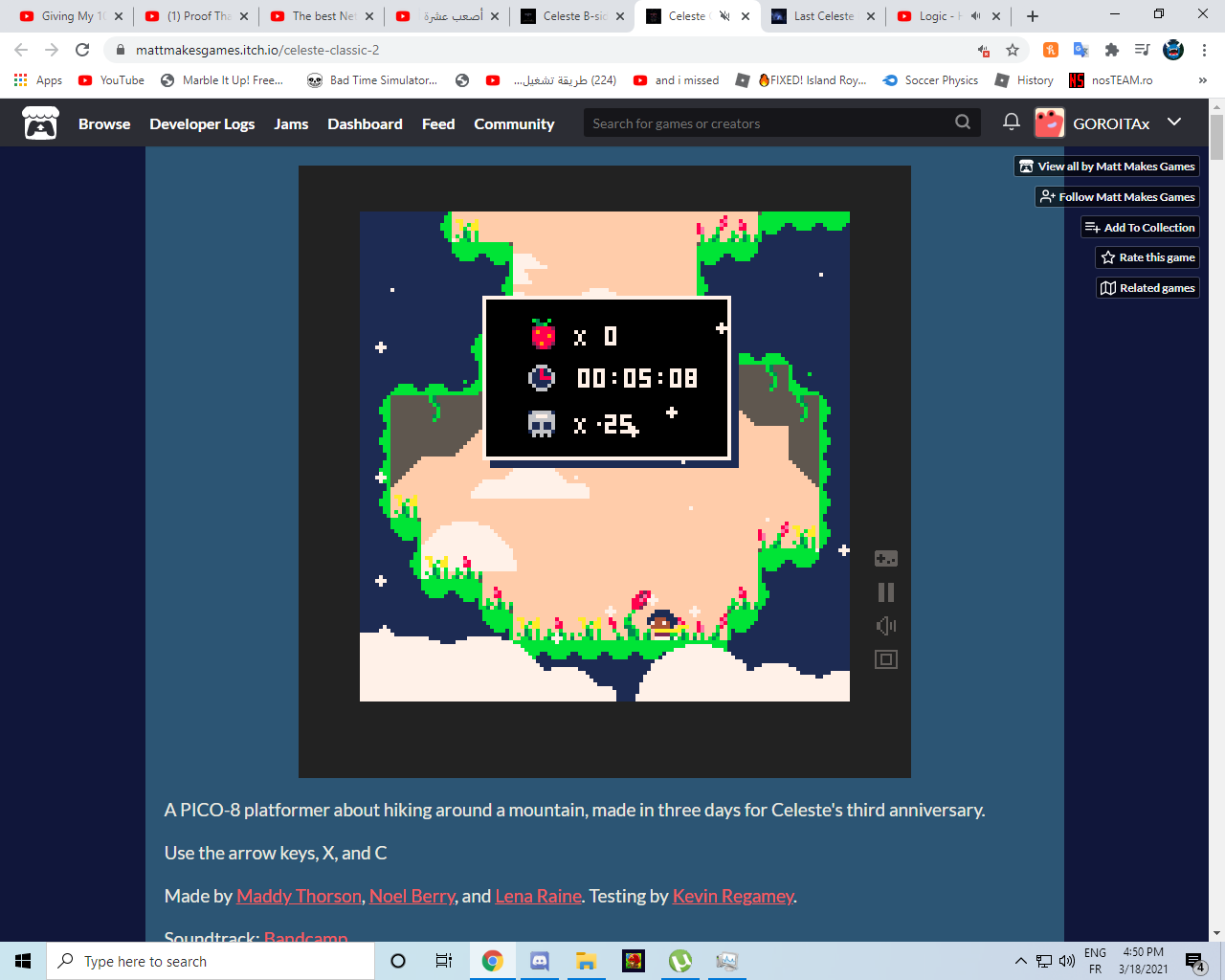 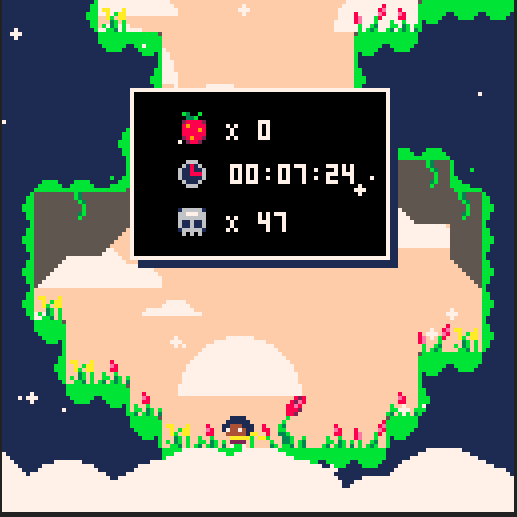 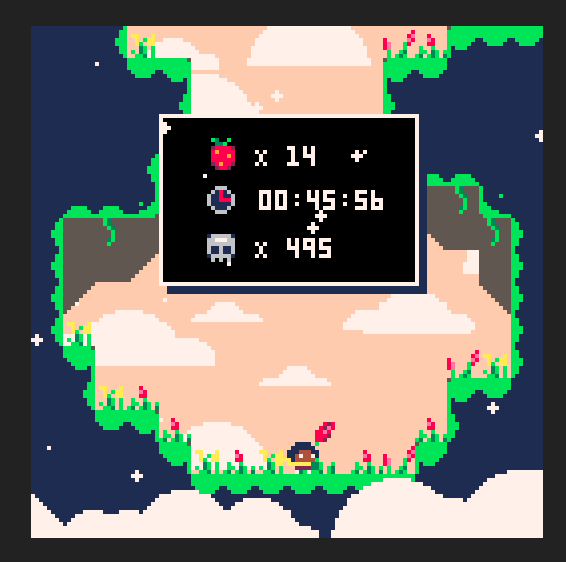 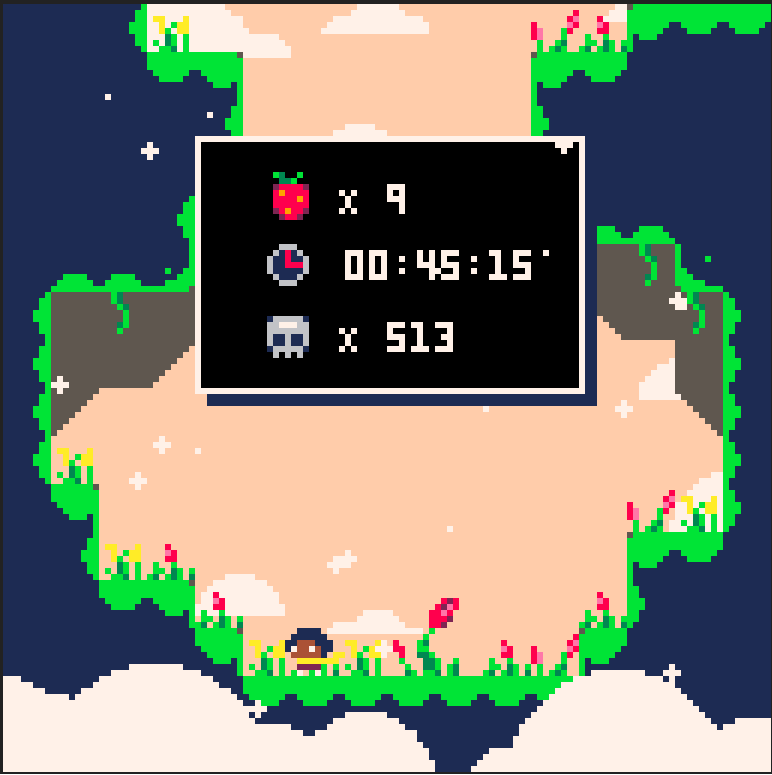 I 100%'d Celeste and Celeste classic, and I can say this game is ridiculously difficult.

Pretty great, I mean it would be far worse if it was too easy, but sometimes the difficulty spikes that high, that you would spend like 5 minutes on the same fucking checkpoint.

They may or may not have cut a couple levels that would reduce the difficulty spike, which means you dive right into fcking action. In literally the first room of the second area you have to throw a snowball on spikes and then jump on it while it's rolling to progress further

Sometimes it feels like Item Abuse 3 level bullshit with the item juggling and everything, but then you do it and it feels incredible.

In general I think the game is rather fair and totally doable by a human. Really pushes the limits of what's possible in platformers

a lot harder than the first one, that's a good thing. impressive for 3 days!

Thank you, Maddy, Noel, Lena and Kevin for making and letting me play this! I look forward to a full game (if you make it) and hope you have a good day. :)

The first thing I have to say is that I was very surprised how the way of moving around the original title changes so much; When the previous game offered a higher and slower jump along with an aerial lunge by a hook mechanic. If I have to acknowledge something about these games, it is that they are enjoyed more a second time you play them and you see the difference in experience and skill when entering the mountain, in particular I feel that this game is much more demanding and requires more precision when playing. advance through the levels even if this time I manage to collect all the strawberries that are distributed in the game for those who want to test their skills. For something done in three days, it's a great game and gives hope for a sequel to Celeste's console game.
I make a gameplay with controller display inputs: